STATE LEADERS AGAINST ARMED GUARDS AT PLACES OF WORSHIP

STATE HOUSE, BOSTON, OCT. 29, 2018.....Neither the governor nor the two leaders of the Legislature think arming guards at places of worship should be considered in Massachusetts to prevent the type of violence that erupted at a Pittsburgh synagogue over the weekend.

Gov. Charlie Baker, House Speaker Robert DeLeo and Senate President Karen Spilka dismissed the suggestion that armed guards could be used to foil would-be shooters. The idea was floated Saturday by President Donald Trump as one that might have prevented the murder of 11 worshipers at the Tree of Life synagogue.

"No one talks about or thinks that arming churches is a good idea," Baker told reporters after huddling for over an hour with DeLeo and Spilka at a regularly scheduled meeting where the tragedy in Pittsburgh was a topic.

Baker said he hoped to bring the two Democratic leaders into an upcoming meeting of his Hate Crimes Task Force so that they can hear about some of the things the group has been working on and share their own ideas. He said the task force, which he reconvened last year amid reports of a rise in anti-Semitic incidents across New England, has been focused on "preemptive measures" like intelligence gathering, better awareness and collaboration between faith communities and law enforcement.

"Armed guards are clearly not the answer," said Spilka, who is Jewish. 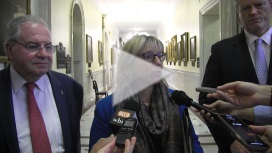 Spilka noted that four members of a trained, armed SWAT team were injured in a firefight with the Pittsburgh suspect. "Having some sort of security at a temple or place of worship is not the answer," she said.

DeLeo, whose chief of staff is Jewish, called the attack on the synagogue a "foolish, anti-Semitic act."

"I think the so-called armed guard answer probably makes as much sense as having teachers armed in school attacks," DeLeo said.

The speaker spoke about the emotion of looking out on the crowd from the Parkman Bandstand in Boston Common on Sunday where people gathered after the shooting to mourn.

"In these next few days at least, obviously we can talk about trying to prevent these things maybe from happening again and the concerns that we have, but I think right now we should just take a small bit of time and make sure that we remember, that we remember these families that have been horrifically affected by this act in Pittsburgh and what they must be going through right now for this foolish, anti-Semitic act, which was strictly aimed at people of the Jewish faith," he said.

His next meeting with the Hate Crimes Task Force is schedule for the middle of November.

Spilka urged people to "continue with act of kindness."

"One of the major tenets of the Jewish religion is helping strangers, having your doors open, having your arms open to strangers to help a much as possible and that's something that is very strong. I can't imagine that ever being changed," she said.