STATE HOUSE, BOSTON, JAN. 23, 2019....Gov. Charlie Baker on Wednesday rolled out a seven-year plan to boost school funding by more than $1 billion dollars, including what his education secretary described as a "historic investment" in communities where students are facing achievement gaps.

Baker said his plan, which also includes reforms around charter school reimbursements and new authority for the state education commissioner around struggling schools, will not require new revenue.

"Our proposal is the whole package, more money and more reforms to make sure we're using this funding to help accelerate learning in our schools that struggle the most to give our kids the education they deserve," Baker said.

The move comes more than three years after a state commission found the current foundation budget formula underestimates the cost of education by $1 billion to $2 billion a year by inadequately accounting for expenses related to employee health care, special education, and educating low-income students and English language learners.

In his fiscal 2020 budget, Baker is recommending increases in spending for each of those four areas -- $30.6 million for health care, $4.3 million for special education, $12.8 million for low-income students and $13.6 million for teaching English language learners.

Education Secretary James Peyser said the "vast majority" of new resources in Baker's proposal will be targeted to "high-needs districts with the largest share of low-income students and English language learners."

"When combined with a substantial increase in the targeted assistance line item and the establishment of a new $50 million school improvement trust fund, these recommendations represent an historic investment in communities that are struggling with persistent opportunity and achievement gaps," Peyser said.

Baker's funding reform proposal would increase the foundation budget, the minimum amount school districts must spend on education, by $1.1 billion by 2026. In addition to the increased state spending, municipalities would have to step up their own contributions to schools.

"By doing it over this stretch, we're confident it can be sustained investment that does not force local communities to absorb too large an increase all at once," Baker said.

Some education advocates, however, are calling for a quicker timeframe.

The Massachusetts Budget and Policy Center described Baker's reforms as "a positive step" but said they are "gradual and will not go far enough to ensure all our children receive the high quality education they deserve." Interim MassBudget President Marie-Frances Rivera said full implementation would require a funding level of about $316 million a year, and that her group has recommended a five-year timeline. 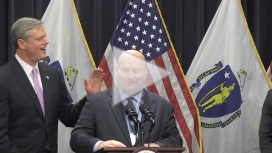 Brianna Aloisio of Stand for Children Massachusetts said seven years "does seem like a long time to implement this."

"We're thankful that the governor and the House and the Senate are on the same side that something needs to be done, but we're hoping that it happens sooner rather than later," she said.

Baker's proposal is not the only possible path to school finance reform. Sen. Sonia Chang-Diaz, a Boston Democrat, has also filed funding legislation, with a price tag of between $900 million and $2 billion, that would also be implemented over multiple years. House Speaker Robert DeLeo said his branch plans to continue working on the issue.

The Fund Our Future Campaign, which backs the Chang-Diaz bill, said the governor's plan was "more of the same inadequate measures we've come to expect from Baker."

"It's nice to see Governor Baker finally admit that our public schools and colleges are underfunded, but we have been living with the effects of this underfunding for decades," Lisa Guisbond, a campaign leader and the executive director of Citizens for Public Schools, said in a statement. "Baker's proposal makes a dent in the problem, but today's college-aged students have suffered with underfunded public schools and colleges their entire life. With Governor Baker’s proposed seven-year phase-in, today's sixth graders would face the same fate. We will not accept another generation being deprived of its constitutionally guaranteed right to a quality public education."

Any funding bill lawmakers take up would be subject to revisions during the committee process and amendments offered during debate.

A completed 2020 budget is due for the start of the fiscal year on July 1, and Baker said "in a perfect world" he'd like to see "the education reform bill get done around the same time."

House Minority Leader Brad Jones, a North Reading Republican, called the collapse "one of the biggest missed opportunities of the 2017-2018 session."

"With Governor Baker's decision to put forth a package of funding increases, new policy initiatives, and stronger accountability standards in his budget and an accompanying bill, the stars may now be aligning to implement meaningful reforms to the way education is funded in Massachusetts," Jones said in a statement. "I am hopeful the Administration and the Legislature can work together this session to break through the impasse and develop a viable plan to correct the inequities that exist in the funding formula and ensure that every student in Massachusetts has the opportunity to succeed."

Baker is also proposing to change the way school districts are reimbursed when students who live in their district attend charter schools. His budget seeks to move the formula to a three-year schedule, with 100 percent reimbursement the first year, 60 percent in the second year, and 40 percent in the third year.

Peyser said the current six-year formula has never been fully funded and the administration believes the three year version could be.

He said communities like Boston, where more than 9 percent of net school spending is on charter tuition payments, would benefit from a new guaranteed minimum level of state support included in the bill.

Baker's plan would grant the education commissioner the ability to withold aid from the central offices of districts where struggling schools are deemed not to be sufficiently improving and are not taking steps required under their turnaround plan. The funds, which would go into a new trust fund for future use in those districts, could not be withheld from schools or direct student services.

Jeff Riley, the education commissioner, said the Department of Elementary and Secondary Education would be able to "have a stronger hand in guiding schools that have continued to struggle year over year, allowing for a second set of eyes to help them improve."

"For a very small number of schools, this would be another tool in the toolbox to ensure strong outcomes for all of our kids," Riley said.

The Massachusetts Teachers Association said it was "deeply troubled" by this provision, which they said "appears to be a lever the state could use to demand that districts implement the detrimental policies — perhaps even privatization schemes — that officials such as Education Secretary Jim Peyser have long supported."