STATE HOUSE, BOSTON, FEB. 7, 2019.....Opposition to a proposed natural gas compressor station in Weymouth surged on multiple fronts Thursday with protests at the State House, the release of a report warning of potential health and environmental hazards, and new opposition from an organization whose work had paved the way for issuance of a key permit.

Close to 100 environmental activists crowded the hallway near Gov. Charlie Baker's office, chanting that "children's health is not for sale" and holding paper scissors to demand the administration cut ties with fossil fuels. They pointed to a detailed account, released earlier that morning by eight experts, warning the compressor station would pose significant threats to an area already grappling with high rates of respiratory disease and poor air quality.

"This community is especially vulnerable," said Susan Racine, a doctor and instructor at Harvard Medical School and Beth Israel Deaconess Medical Center. "These people, nearly half of whom constitute an environmental justice population according to the definition of the Baker administration, deserve greater, not lesser, environmental protection."

Racine was one of the eight authors, associated with the Greater Boston Physicians for Social Responsibility, who collaborated on a 19-page report released Thursday. She joined advocates from Mothers Out Front, the Sierra Club and Fore River Residents Against the Compressor Station outside Baker's office later that day to speak out against the project.

The station, envisioned as part of the Algonquin Gas Transmission Pipeline owned by Canadian giant Enbridge, has drawn significant criticism from advocates and from elected officials since it was proposed. State leaders commissioned a health impact assessment in 2017, and the results released last month found the proposal would cause "no substantial changes in health" from direct exposure other than the sounds of construction. 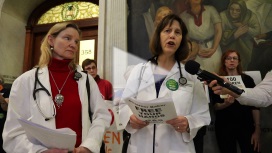 The Department of Environmental Protection soon issued an air-quality permit — in Baker's words, leaders "basically had no choice" following the health impact assessment's results — bringing the station a major step closer to approval.

But the Metropolitan Area Planning Council, the group that prepared the assessment, created new ripples Thursday when it came out in opposition to the plan. Executive Director Marc Draisen, a former Democratic state representative, told WBUR he had "deep reservations about the compressor that don't happen to be related to the air quality issues," such as damage to the climate and the risk of fires or explosions from natural gas.

Protesters pointed to the MAPC's position as further evidence that the initial study was insufficient.

"Our future, the future of my child and all of our children, depends on us saying no to building any new gas pipelines or compressor stations," said Amy Tai, a volunteer with Mothers Out Front.

The protests came just one day after Baker testified in Washington about bipartisan efforts in Massachusetts to address climate change.

Despite the air-quality permit, the project must clear several other hurdles. The state Office of Coastal Zone Management, wroting to Algonquin leaders in January, proposed a six-month stay in its review of the proposal to coordinate more closely with the Department of Environmental Protection.

DEP itself will weigh an appeal of the permit, filed by three citizens groups as well as the communities of Weymouth, Quincy, Braintree and Hingham, at a pre-hearing conference next week and a formal hearing in May. The pre-hearing conference is open to the public starting at 9:30 a.m. in the department's Lakeville office.

On top of those obstacles, boards of health in 93 communities across the state penned letters to DEP opposing fracked natural gas.

Once they had finished outside Baker's office on Thursday, about 30 protesters donned nametags bearing names of some of those communities and walked over to DEP's office downtown. One by one, they handed over the letters, pleading that the department address what Mothers Out Front organizer Claire Humphrey described as a "rushed, inadequate and faulty" health impact assessment.

DEP staff thanked the crowd for the input but said that because of the permit appeal, they could not speak at length about the compressor station.

"The 'P' in DEP stands for protection, not pollution," Humphrey said. "We are asking you to protect children in the Fore River basin and across the state."