STATE HOUSE, BOSTON, MARCH 27, 2019....With the Senate slowly gearing up for a long-term exploration of the state tax system, House Speaker Robert DeLeo on Wednesday said the House was unlikely to participate in the exercise, and Gov. Charlie Baker said he remains opposed to "broad-based" tax increases.

Senate Democrats are close to rolling out detailed plans for a working group to be led Sen. Adam Hinds of Pittsfield that will look at the state's tax code. Senate President Karen Spilka has been talking about an examination of the tax code since she was sworn in as president in January, and the Boston Globe reported on Tuesday that the effort could take as long as two years.

Spilka's office, however, said that the working group "does not preclude making decisions about the various revenue proposals that may come up this session," and DeLeo said he did not think that the Senate's study would impact decisions on revenue his year.

"I think the Senate president said she thought this process would take awhile, which says to me she and her team are going to do what I would describe as a thorough review of this, but we do not come at this from the point of view that Massachusetts needs to raise taxes," Baker told reporters on Wednesday. 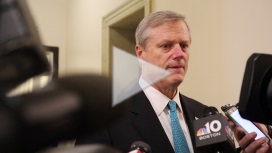 The Republican governor has resisted turning to revenue generators like the sales or incomes taxes -- both broad-based taxes -- to generate new money for priority programs, but has presented a budget and legislation this year that would raise money through new or increased taxes on real estates transfers, opioid sales and vaping products to pay for climate change adaptation and substance abuse prevention.

He said he didn't know what Spilka's working group might mean for tax proposals this session.

"I'm going to give the Senate president the benefit of the doubt and assume that her objective here is to take a look at the tax code based on the fact that we're now living in a 21st century economy, but we've said before that we think we should not be raising broad-based taxes," Baker said.

DeLeo has also left the door open to new revenue streams this year, and invited the business community to come to him with tax ideas that it could support to invest in public transit improvement, traffic mitigation and education.

The speaker, however, said Wednesday that it's his opinion that the Joint Committee on Revenue, co-chaired in the House by Rep. Mark Cusack, should be the group tasked with vetting the tax code and revenue proposals.

"I congratulate the Senate president for looking at this issue. I think it's an important issue to look at. I think our means are probably just a little bit different in terms of how we go about it," DeLeo said.

The speaker also said that Spilka has told him personally that her objective with the tax working group is not to lay the groundwork for a major tax hike in two years, but to look at ways to "modernize" the tax code and make it "more equitable." 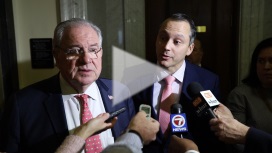 "There's nothing to be read into this in terms of what the future may hold," he said.

Sen. Adam Hinds, the co-chair of the Revenue Committee, will lead the working group.

Sen. Jamie Eldridge, the leader of the Senate Progressives Caucus, said he was "encouraged" to see Spilka following through with the tax reform working group.

"I'm certainly hearing more and more calls from not just my colleagues, but municipal officials and business that we need to raise significant revenue to fix the transportation system, to figure out how we're going to fund the foundation budget commission recommendations and things like climate change," Eldridge said.

Eldridge, however, said he did think it was critical for the Legislature to agree to some new revenue this year, and told Senate Ways and Means Chairman Michael Rodrigues in a recent budget meeting that he would be advocating and voting for that.

"I think that things have really changed in the last couple of years and I hope that means we're not just going to wait for the millionaires tax to pass in four years at the ballot but the Legislature will have the will to pass significant revenue and my preference is progressive revenue, taxing the wealthy and closing corporate tax loopholes," the Acton Democrat said.

Taxes aren't the only issue the Senate plans to explore this session with working groups operating outside the traditional joint committee structure with the House, according to several members of staff and senators.

Sen. Joseph Boncore, a Winthrop Democrat and the co-chair of the Transportation Committee, is working on putting together a transportation working group that could be announced in the next couple weeks that is expected to look at both policy and financing options.

Sen. Julian Cyr is also pulling together a group that will include outside stakeholders to review the state's mental health system and gaps in access and care that could be addressed. The Truro Democrat is chairing the Joint Committee on Mental Health, Substance Use and Recovery this session.