STATE HOUSE, BOSTON, APRIL 10, 2019.....The House's plan to take a wait-and-see approach on new revenues this session, rather than pursue new sources of funding in its fiscal year 2020 budget, was not well-received by two major advocacy groups Wednesday.

The budget proposal (H 3800), which the House is expected to debate in formal sessions the week of April 22, would boost total state spending by 3 percent over the current year's budget and includes no increases to broad-based taxes.

Marie-Frances Rivera, president of the Massachusetts Budget and Policy Center, said that her organization appreciates the "thoughtful approach" the House plans to take on revenue but panned the budget plan itself, with no associated revenue boosters, as unhelpful.

"Moving the needle on current priorities -- from education and transportation, to affordable housing and other services -- means giving serious consideration to sustainable, adequate, and progressive revenue options," Rivera said in a statement. "The House Ways and Means Committee budget proposal would make it nearly impossible for lawmakers to support our Commonwealth's priorities in any meaningful way in the coming fiscal year."

The Fund Our Future campaign, an advocacy group made up of more than two dozen labor and community organizations pushing for changes to how the state funds public schools, said the Ways and Means Committee's inclusion of $218 million in new Chapter 70 education aid and its new $16.5 million program to support low-income students is notable and laudable.

But the House is planning on addressing the school funding formula after it passes a budget, and Fund our Future said "half-measures will not be sufficient." The group pledged to continue pushing "for the major reinvestment that our students need."

"We know that students, especially in low-income urban and rural communities, need significantly greater investments than this budget provides, and they need to see those increased investments this year," the coalition said in a statement. "We hope that this budget proposal represents a down payment on the way to the massive school finance overhaul that we need to give every student a high-quality public education from preK through college."

The Massachusetts Teachers Association was also unimpressed by the plan, calling the funding for education "woefully inadequate."

"While the House budget is a modest improvement over the governor's plan, it must be amended to increase education funding. As the House debates the budget, we will continue to fight to pass bills that would require phasing in significant increases for public education over the next few years," the state's largest teachers union said in a statement.

The MTA supports legislation put forward by Sen. Sonia Chang-Diaz and Rep. Aaron Vega known as the "Promise Act," which the union called the only bill that would achieve "a once-in-a-generation opportunity to provide all students and communities with the schools they deserve." 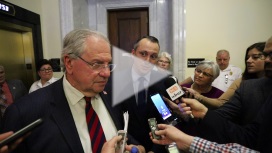 The committee budget was well-received by members of the House's Republican caucus, which accounts for 32 of the 160 House members. Republican leaders pointed out that the budget bill "builds on the Baker-Polito Administration's commitment" to increasing local aid and school funding, and endorses the Baker-Polito administration's plan to let MassHealth directly negotiate drug prices.

"The good news for the state's taxpayers is that the budget does not impose any new broad-based taxes," North Reading Rep. Brad Jones, the House minority leader, said. "I will be working closely with the members of the House Republican Caucus over the next few days to identify potential amendments we can offer to further protect the interests of the state's taxpayers and ensure the passage of a fiscally responsible budget."

Rep. Todd Smola, the ranking Republican member of the House Ways and Means Committee, did not respond to messages from the New Service on Wednesday. Other Republican House members deferred to Smola when asked their thoughts on the committee's budget plan.

In recent years, Jones and the Republican caucus have raised concerns about the way the House conducts its multi-day budget debate. Rather than go through each of the hundreds of amendments filed by members, House leaders typically hold court with amendment sponsors in a private back room and decide amongst themselves which amendments will be adopted and which amendments members will be asked to withdraw.

The House typically consolidates dozens of amendments into packages based on subject matter that can be approved with a single vote, making it more difficult for the public and advocates to discern exactly what the House approves and what is left out of the budget. On Wednesday, Michlewitz said he and his team are still deciding how to conduct the debate.

"In terms of the actual procedure, I think we're still working on exactly what's the right way to do it," he said. "We're looking at what's previously been done and what we could add to it as well."

In a Rules Committee's order adopted Wednesday laying down the rules of the budget debate, the House agreed to exclude from consideration any amendments "that would authorize any form of illegal gaming or authorize or regulate any form of gaming not presently authorized or regulated in the commonwealth."

Amendments are due to the clerk's office by 5 p.m. on Friday and debate on the amendments will begin April 22, with those that would alter state revenue up for consideration first.

The budget proposal was rolled out a week after the Department of Revenue reported that a $292 million shortfall in state tax collections was wiped out in March thanks to monthly tax revenues that exceeded projections by $316 million, or 13.4 percent. With three months left in fiscal year 2019 -- including April, the largest month for tax collections -- Massachusetts stands $19 million above its revenue goal.

"This is in contrast with the release of the House Ways and Means budget from last year, when the year-to-date collections were actually at $892 million above benchmark," Michlewitz said. "So while we've had a nice recovery in February and March, we're still in a volatile situation."

In his letter to fellow House members, Michlewitz attributed the swing in state revenue to "volatility in the stock market, the 24 day shutdown of the Federal government, and recent changes to the Federal tax code."

Eileen McAnneny, president of the Massachusetts Taxpayers Foundation, wrote in an op-ed Wednesday that House budget managers "would be wise to proceed using conservative revenue estimates and judicious spending assumptions" to avoid having to change course later in the fiscal year.

The foundation highlighted the volatility of tax collections this year, and the challenges of forecasting the next year based on FY19 collections, in a recent brief.